18 May How about a cup of coffee before taking Hankyu train? Nestlé Japan to install more coffee stands in railway stations

Nestlé Japan and Hanky Railway Corp. will build more “Nescafé stand”, which they originally built in the five stations of Hankyu line, including Tsukaguchi station, last year. The “Nescafé stand” sold more than 500,000 cups of coffee in the past five months, that had been expectations. The companies will build the stand in seven more stations from the end of May onwards.

Comments: Why there were not many coffee stand in the commuter railway stations? It is a good marketing! 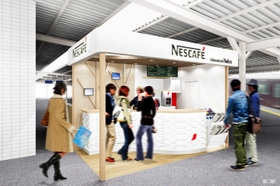 19 May Costs of Tokyo Olympic Games and Paralympics to be paid by Tokyo Metropolitan, estimated to be max. 900 billion yen

Comments: Who pays what is still controversial.